The Full Peaky Climbers Team take on the Infamous Tumble 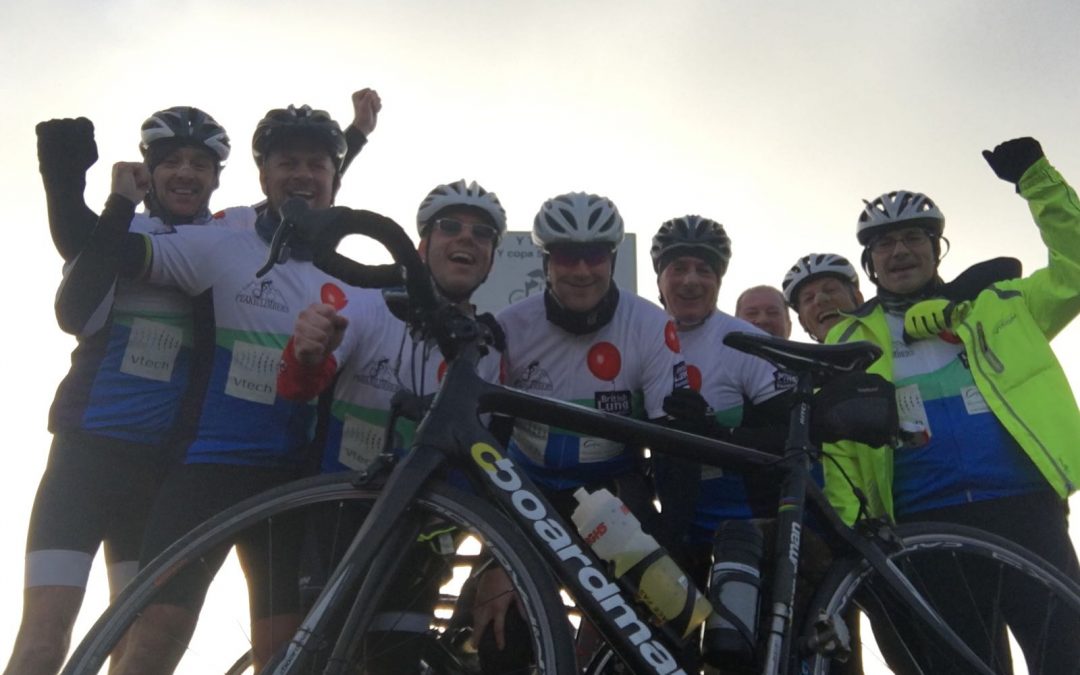 The Magnificent 8 Take on the Mighty Tumble

For the first time all 8 Peaky Climbers came together to cycle from its Welsh training base in Usk South Wales. The ride planned by the wonderful Owain Young, was 62 miles with over 5,000ft of climbing, including the famous Tumble climb up to the top of The Blorenge.

After a 6am start to collect all riders and bikes in 2 vehicles the Wantage based riders set off from group leader Macca’s Peaky Climbers HQ at 6:30am. Simon “Hurricane” Haly drove separately from the Peaky’s Cotswold training camp.

As always Training Officers Mark and Nobby (aka Hinge and Bracket) had an eventful jouney as the rest of the team had wait for them to catch up after getting stuck at Welsh customs. Nobby was very offended at the £13.60  to get his Winnebago into Wales and filed an official complaint, in Welsh of course.

After a brief stop for light refreshment the group finally all arrived at base camp in Usk. Only the best facilities  for our intrepid cyclists. Usk laid on a layby by a disused pub on the A4042 to Abergavenny! The Training Officers had the Winnebago (well Nobby’s van) and others stood in the layby scaring the sheep. All were slightly surprised by the 1 degree temperature on arrival so various clothes swapping ensued. After 30mins to dress, fix up equipment, sun cream and do an extensive pre-ride warm up lead by ‘Mr Motivator’ Ben the team finally headed out at 9am. 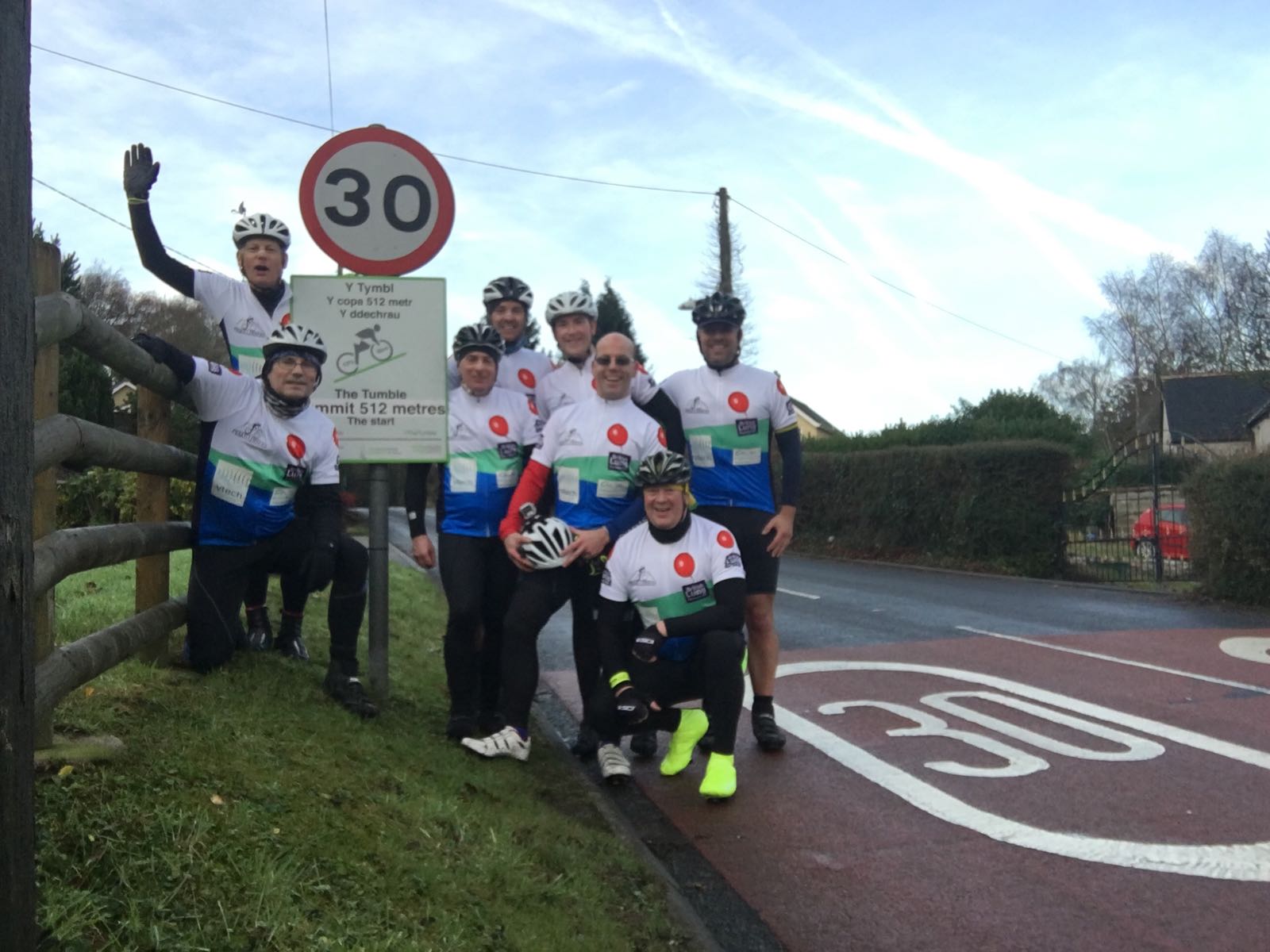 We initially headed off for a 10 mile warm up riding to Abergavenny to the foot of The Tumble, the biggest climb of the day. In fact, for most of us this was the longest continuous climb ever attempted. Being Category 2 it winds for 6km gaining 351 metres (4x up dragon hill) at an average rate of 8% and takes over 30 minutes of continuous uphill cycling.

However, the first 1km has section is at up to 15%. As usual the training officers Mark and Nobby (Hinge & Bracket) were heading the pack (they both finished No.1 & No.2 fastest overall for the day) closely followed by Allen who was team film camera man of the day. This meant Allen was able to stop and various points to catch his breath and give the team welcome encouragement on as they headed slowly up the climb.

As we crossed the cattle grid we also had local support from the sheep munching on their Sunday breakfast. As time moved on all parts of the body were screaming in pain as the pedals would only turn a poultry 40 rpm (normally hoping for 90). But as Stuey said afterwards “this challenge is as much mental as physical and I was determined to get up in one go!”. And so it was we all made it up this 30min climb in one go and celebrated with a group hug and team photo sporting our brand new Sponsored shirts.

Next it was down to Brynmawr and climb back up Mynydd Llangynidr (were not sure how to say this either!). From there we had a wonderful fast decent down to Llangynidr and back into the Usk valley. This is where “hurricane” Haly came into his own powering down the B4560 just like Chris Frome only slowing for the occasional hairpin bend and sheep meandering across the road! All enjoyed the descent but commented we need to work on this aspect as some of the descents in France will take up to an hour and will have 1000ft drops on either side so be careful!! 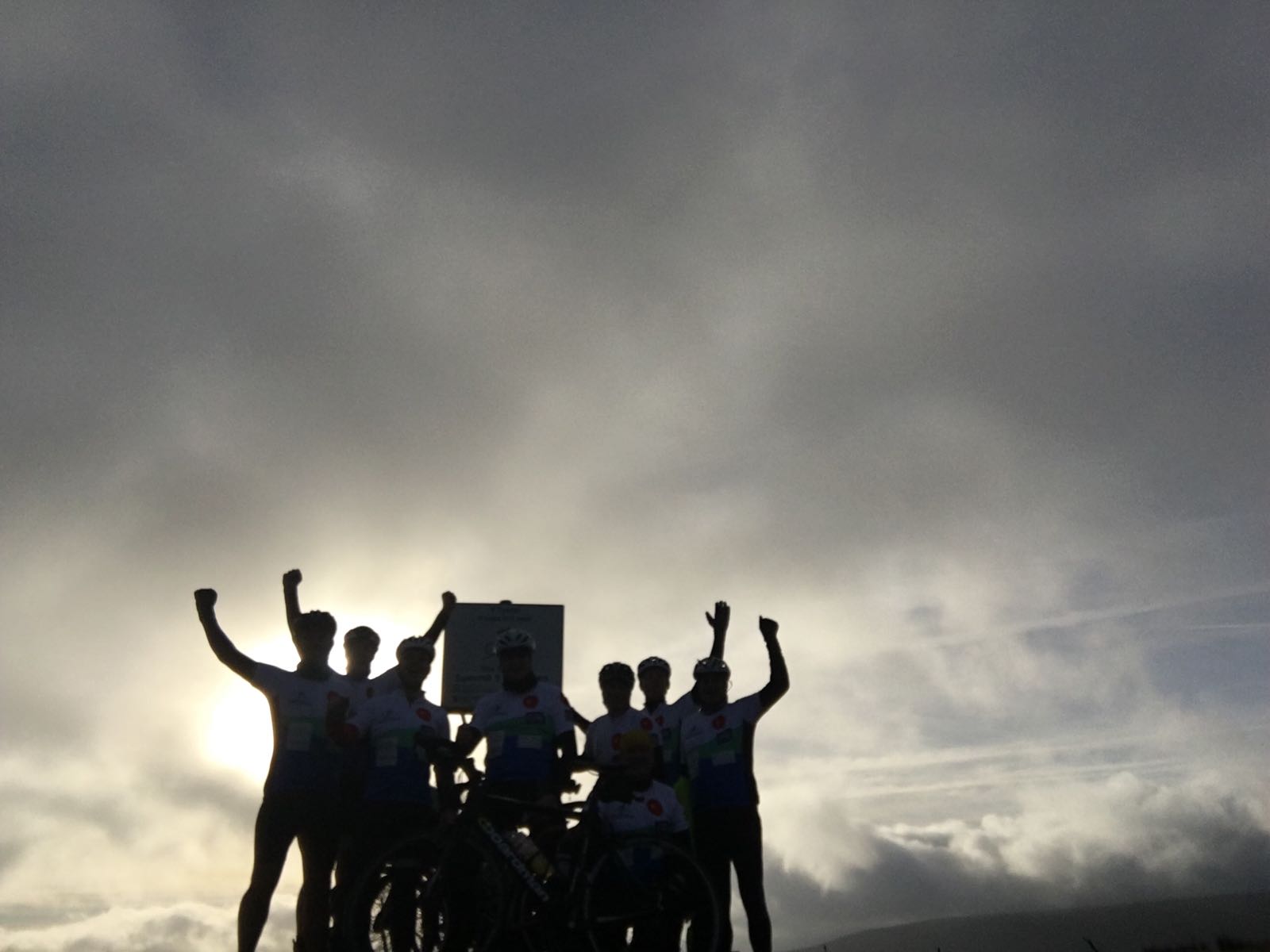 Next was the relatively flat ride along the Usk valley following the river back to Abergavenny. For this the Peaky’s formed a disorderly single file peloton as we were now following the A40 and traffic was much busier. With Mark, Nobby (Hinge & Bracket) and Allen taking turns at the front pace seemed high and all riders were now in time trial mode.

We all imagined ourselves as Bradley Wiggins in the London Olympics. We seemed to be flying along the valley and now eating the miles up as it were breakfast time again. Finally, we had to stop and eat and drink. When we pulled over we found we had created a huge traffic jam and it was a good 5-10 minutes before the traffic had dissipated!

The ride nearly over and just 500 metres from base camp there was a crash! Allen was looking back to see if anyone was missing and as result Mark’s front wheel hit Allen’s. To avoid a pile up Mark bailed out and jumped off his bike and landed on the side of the road. From the back all we could see was Mark lying motionless on the verge but then he quickly got up and straight back on his bike. A sudden wave a worry came over his face as he realised JB had taken off up the road ahead and was in danger of finishing the ride ahead of the Training Captain. JB pulled into the layby (sorry training base) but Mark stayed on the road and just like Michael Schumaker at the British Grand Prix in 1998 managed to steal the win at the finish line by taking another route! Mark was absolutely fine but showed we do all have to be careful when riding in a group!

After changing we met up with Owain and his good lady wife, Nicola, for a well earned beverage and some swift food before making our way back home.

We had a fantastic day in Wales and brilliant to get the group completely together for the first time since formation in September 2016. We also want to thank Owain Young of Grench for planning the route it was truly wonderful especially as it didn’t rain!