This was a big one. It was a critical milestone for the entire Peaky Climbers team and been in the schedule for 6 months or so. The plan was to take on a very tough 100 mile ride and climb 3,000 meters (9,500 feet) in one day – phew!

Our Training Officer, Mark Crick, created the planned route with help and advice from Owain Young. All 8 of us travelled down on the 10th March, braving a bumper to bumper M4 on a Friday afternoon and arriving at our overnight stay in Coed Owen in the heart of the Brecon Beacons at the wonderful Brecon Beacons Bunkhouse around 6.30pm.

Hinge and Bracket dived in and took the only en-suite room, as always team players J Regular roomies, Ben and Allen shared…leaving JB, Stewie, Simon and Macca to share a mini dorm room – which proved interesting.

An evening meal was booked at the very impressive Nant Ddu Lodge and a feast was had by all. This was to ensure the desired calories were taken on board ahead of what was our teams biggest challenge to date…3,000+ meters of climbing in a 1 day 100-mile ride.

Allen Stacey managed to win the ‘Trigger’ comment of the evening when he asked “does anyone know how long the London100 cycle ride is?” – this took a massive amount of pressure of Cricky, as anything he now said was never going to be as ‘Trigger like’ as that! 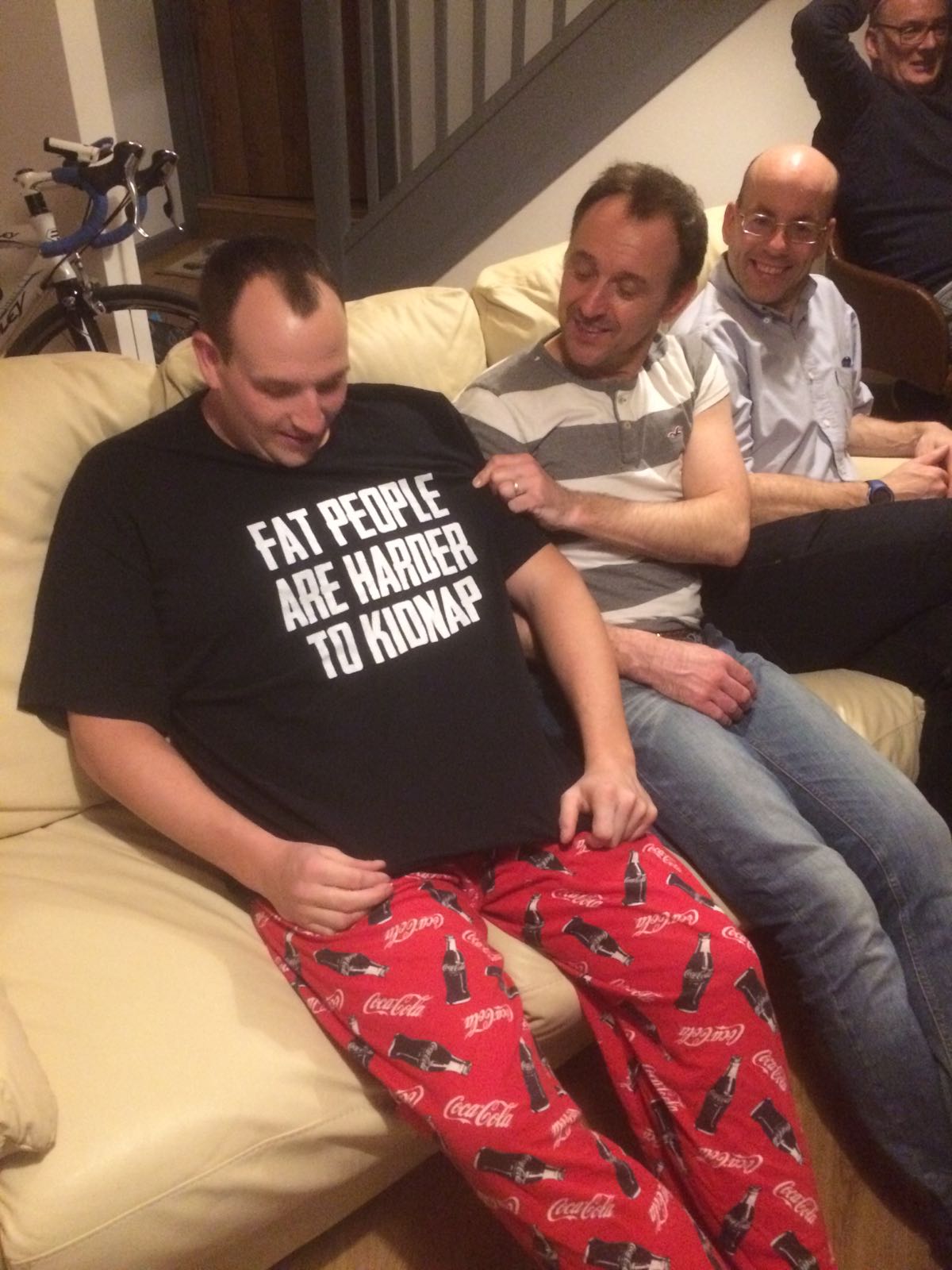 The plan was to get an early 7am start on Saturday morning. This involved Mark and JB setting their alarms for a crazy wake up time of 5.30am!

Blaring music around the barn early doors and with a bustling, busy kitchen with coffee brewing, porridge bubbling and Simon’s specially made cheese omelette’s, all the nervous talk was about the days Challenge ahead.

The challenging route was going to be picturesque but tough. 3 massive climbs including the infamous Tumble, a climb up Llangynidir Mountain and Gospel Path at Bluff Hay with Pengenffordd thrown in for good measure!

After quick a quick photo shoot, the PEAKY CLIMBERS set off with real enthusiasm at 7.15am and headed out to a short climb early on then down from Pen y Fan towards Brecon.

Some early morning fog added to the mornings splendour and as we cycled the first 25 miles in good spirits with some breath-taking countryside and gorgeous towns and villages the sun was starting to make an effort to blast through the clouds and morning mist. This took us to the foot of our first big climb of the day – it’s No.94 on the list of UK’s best climbs – Llangynidir Mountain. A tough, long climb it has an average gradient of 7.7% and is over 4km long.

Twisting and turning its way to the top – all 8 PEAKY CLIMBERS completed the climb. Today’s ride was all about pacing yourself, no prizes for speed it was all about getting to the end today and completing the ride.

After a far too lengthy coffee break J and Cricky getting a puncture, which Al helped fix, the guys were back on the road. A 7-mile constant long drag up Pengenffordd, sapped even more energy before we headed in to a town named Three Cocks, no juvenile comments needed please.

It was at this point that Stewie called time. He’d been feeling slightly under the weather and had the onset of a poor stomach, so he had to head back to Abergavenny to recover with a view to a rendezvous with the rest of the PEAKY CLIMBERS later in the day…now down to 7 riders…the journey continued.

Next came a 5.5 mile climb up to Bluff Hay, averaging 5%. This included Gospel Pass, another top 100 UK climb, with 11% aspects thrown in to keep the climb tough, peaking at 15%. Again, there were no prizes for speed – it was about pacing yourself and keeping the tempo going whilst supporting your team mates. An excellent climb from JB, with Nobby and Cricky out in front followed by Macca. Simon pushed hard all the way and Allen continued to support Ben, as he did do on all the major climbs – great team spirit across the board.

A speedy long, long, long decent into Abergavenny and time for a ‘pit stop’ to top up on food. All agreed to grab some decent carbs ahead of taking on the tumble, so what better than a decent plate of egg, beans and chips or fish and chips – perfect!

As we departed it started to rain. Stewie headed off to the pub and we agreed to pick him up later once we had completed the ride. He’ll do anything to have a few beers and watch the rugby and football –  there’s always a cunning plan going on!

Back in December we did climb the Tumble for the first time. However, today was very different as we had 75 miles of tough cycling in our legs and 3 major climbs in the bank…it was time to see if the Winter training was paying off and to see if we had the stamina to keep driving on.

Nobby and Cricky lead the way, as standard. Macca, JB and Simon started in sync and the wonderful Mr Allen Stacey stayed side by side with Ben from start to finish! The comments from all was that the climb seemed tougher than the first-time round. This was unquestionably due to the previous 75 miles. 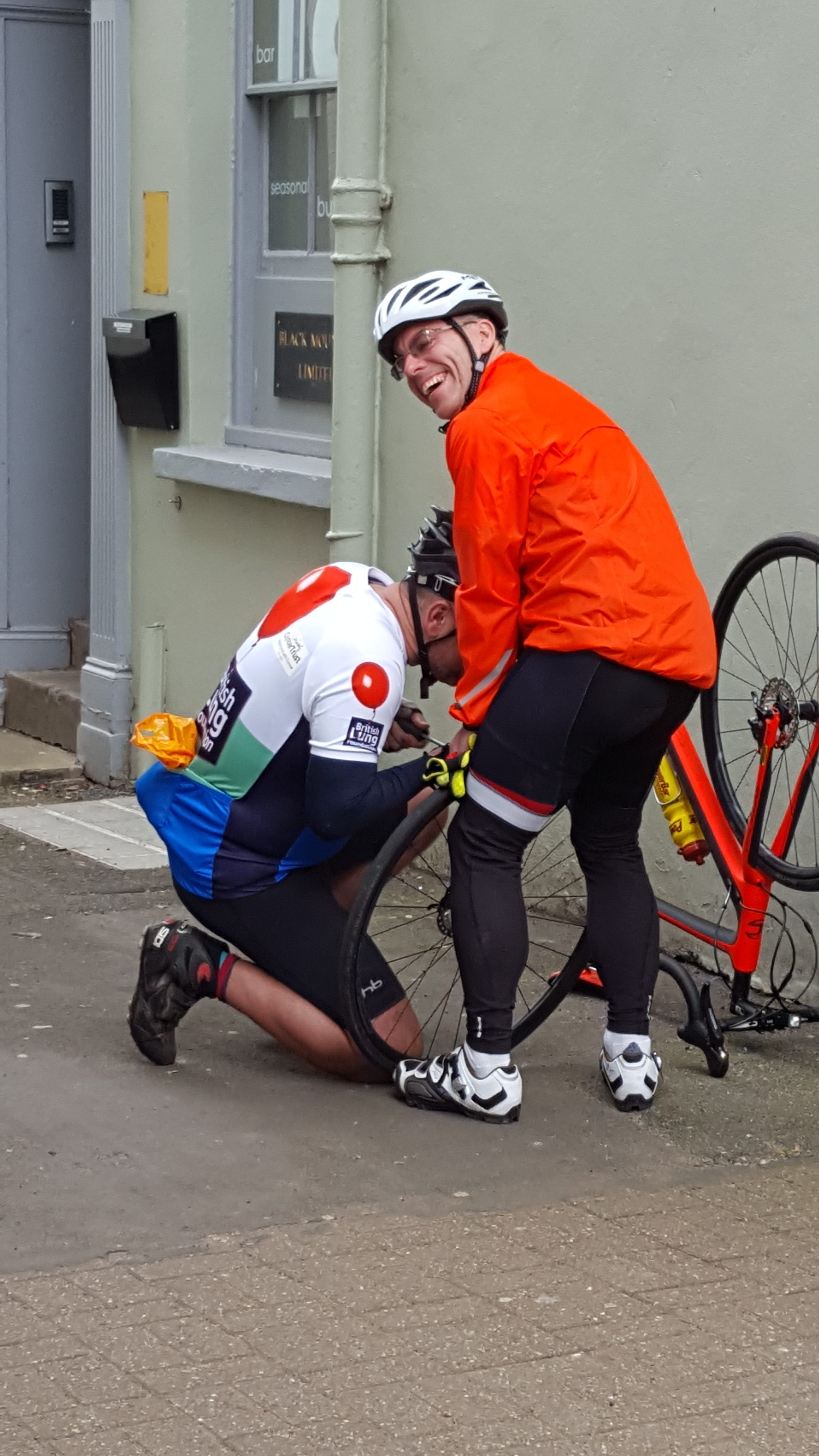 Nobby and Cricky kept pushing on, with Macca slowing creeping up the climb. As an act of Peaky kindness, the guys slowed for Macca enabling all 3 of us to cross the finish line together – a great feeling. Soon followed by JB and Simon, in his low-cut top.

As the lads were waiting for Ben and Al the sheep started to become ‘friendly’ and one took a liking to Macca’s protein drink bottle. 2 minutes later, Cricky’s egg, beans and chips made a surprise re-appearance as he managed to be sick after the exertion of the climb. Whilst disgusting to us, Molly the sheep soon dived in and an afternoon feast – much to the groans and consternation of the PEAKY CLIMBERS.

Once we gathered ourselves it was now a 20 mile ride back to our start point, the Brecon Bunkerhouse. All was going to plan until JB’s Garmin packed up, which meant our sat nav disappeared along with the directions home.

It was now getting cold and dark, the teams lights were failing one by one but due to Allen’s ‘scout map reading skills’ we eventually managed to find our way back – but that seemed an endless 20 mile ride, incredible!

A euphoric team arrived back all in one piece, no injuries just Stewie’s illness (he was still in the pub at this time). As it was late, all had a quick change, loaded the bikes and headed off home. JB and Macca went to pick Stewie up, who after a few pints seemed a little brighter may I add.

This was one hell of a ride. One of team spirit, guts and determination and a milestone that’s been achieved that will fill all the PEAKY CLIMBERS full of confidence and motivate them as they now plan for the even bigger challenge of 3 days back to back cycling in the mountains in Mallorca in April.

A proud day. Every single one of the guys should be incredibly chuffed with what they’ve achieved. The team can head into Spring and Summer training confident knowing that mentally they are strong enough to take the King of the Mountains Challenge on and achieve something very few get the chance to do.