The team skipper was in a really bad way this morning. After yesterday’s exertions climbing the Crois de Fair, Macca’s knees were shot. They were so bad that he had to ask JB to help him get off the toilet!

Macca took the tough decision, for the benefit of the team and his long term health, not to ride in the morning but to take a management role on the team bus and encourage the Magnificent 7.

After breakfast, the guys headed out towards the daunting Col de Telegraph. It was a fairly long ride to the foot of the climb, along busy main roads, with the boys made fairly good time. JB was super pleased to see a banner above a tunnel with his name on it, so stopped for the obligatory photographs before the guys pushed on.

The Col de Telegraph was a beautiful climb, with breathtaking scenery. The team tactics for the day were to allow Nobby and Graham off the leash, which they took full advantage of as the sped up the 9% average climb in sparkling form.

Ben was looking extremely good, smashing the climb, although this was to come back and bight him on the second climb of the day. Allen, always solid, rode well as did Cricky. JB supported Simon, to ensure no Peaky Climber was left stranded and alone. This is a core value of the team, showing total commitment to each other and never leaving anyone isolated. 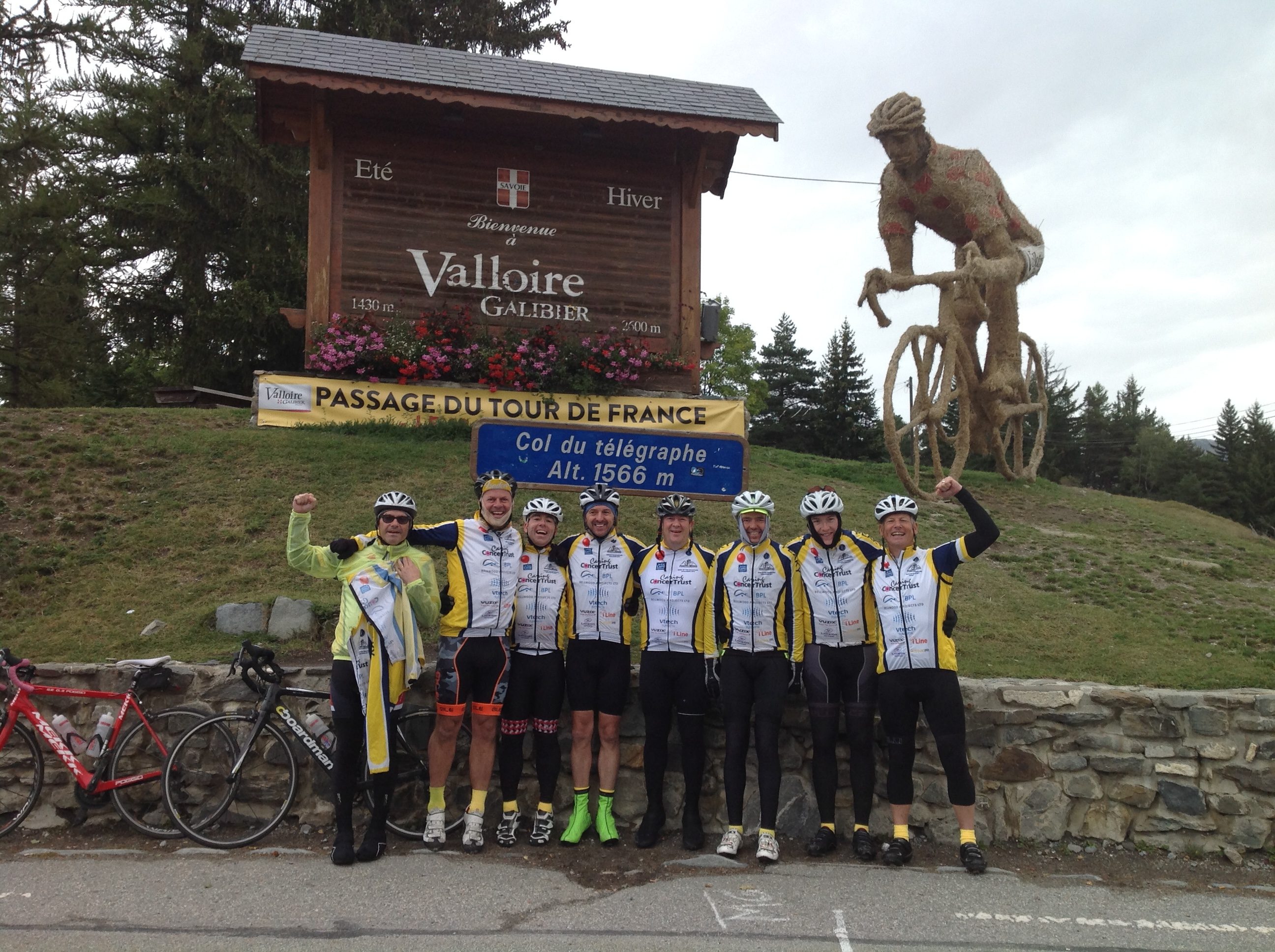 Once at the summit, team photos done, it was a quick decent and on to the very challenging Col de Galibier mountain.
Wow, this is a super tough, 9% gradient climb that goes on for some 18 kilometres. The sometimes harsh and baron landscape added to the dramatic backdrop as the Peaky Climbers hit the penultimate climb of this epic challenge.

Cricky lead out immediately and continued in this pattern strongly throughout the duration of the climb. This time it was Nobby and Graham that supported Simon, imepressively embracing the team ethic and not leaving his side once upon the never ending twists and turns as the mountain meandered ever upwards.

The Galibier is the highest climb of this challenge and with Macca’s new vantage point of working with the support crew, shouting encouragement, taking photos, passing drinks and food…it was an incredibly proud sight to be able to experience watching the team show immense strength of character and never say die attitude on what was a hugely tough ascent.

JB kept up his usual Tigger like boyent approach to every climb, partnering Ben who was feeling the affects of the first climb. There was never any doubt that these 2 would finish in style and meet Allen and Cricky at the top. Soon afterwards Simon, Graham and Nobby also reached the summit.
After lunch atop of the Galibier, and as previously agreed, Macca would now join in the decent and gauge the reactions of his injured knees as the team headed towards the last and perhaps the most famous climb, Alp D’Huez. 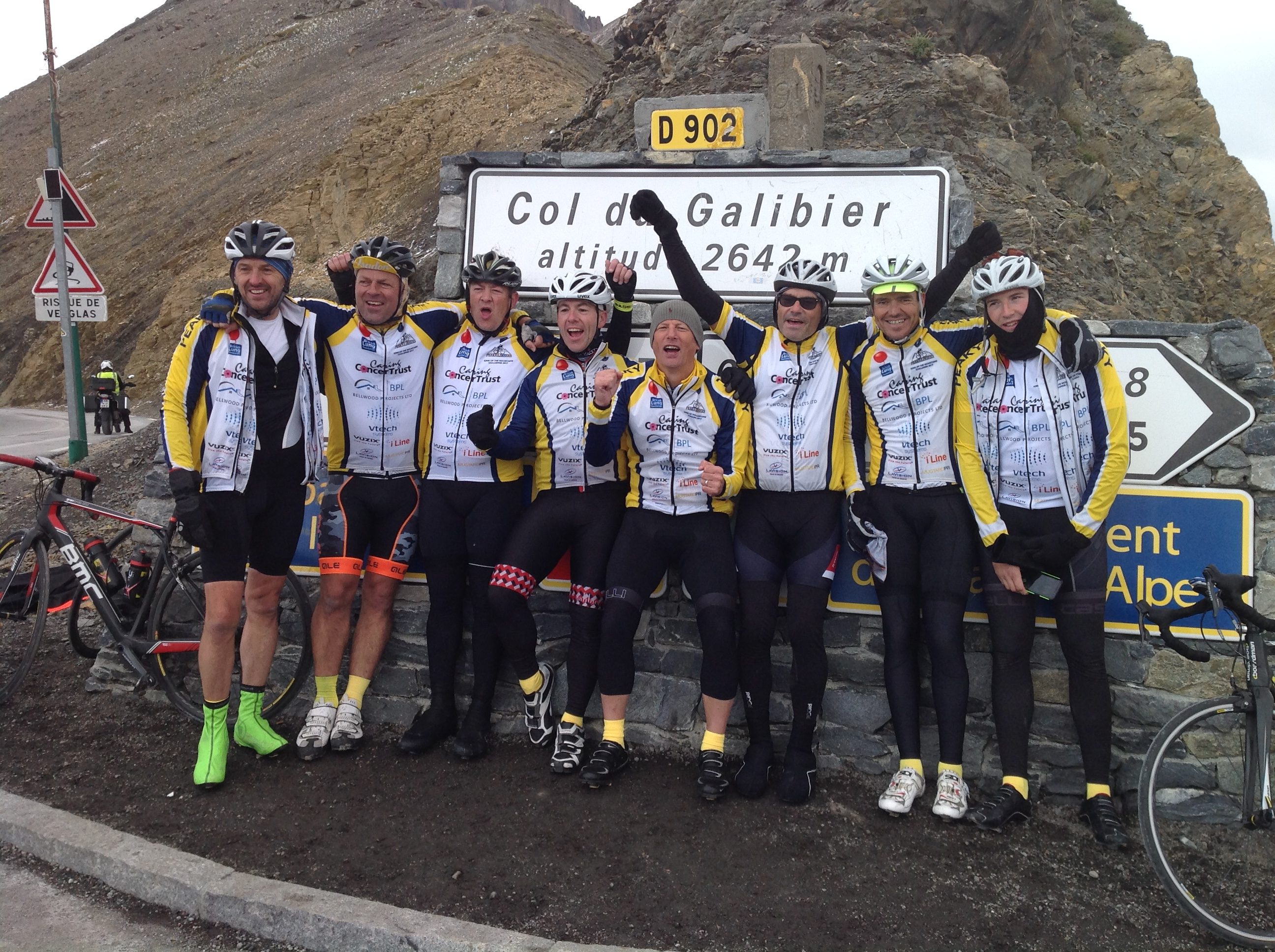 It was a long 40km journey towards the foot of Alp D’Huez, but before taking on the final climb, the Peaky Climbers had arranged to meet up with their wives, partners and friends at a cafe. Emotions were there for all to see as everyone saw each other for the first time in 7 days.

“We love you Peaky’s” rang out in celebratory sing song as the boys approached their loved ones, with a quick 5 minutes of hugs and kisses before they went on their way.

The famous 21 hairpins is all that stood between the Peaky Climbers and completing this epic challenge. Once again team values were at the fore as everyone supported Macca up the climb, staying at his sluggish, painful pace up the 13km climb. In comparison to other ascents on this challenge Alp D’Huez was by no means the toughest, but is arguably the most iconic.

After the first 3km the team could hear sirens, horns and music coming from behind. The Peaky fan club, all the family and friends, were screaming their support and encouragement. It was an amazing feeling for every rider to experience.

This continued throughout the climb, they even stopped at least at 6 of the corners…hooters blaring, Sam was singing through the megaphone and everyone was shouting and screaming encouragement. The Peaky Climbers loved it and basked in the attention, love and support.

Once arrived in the resort, it was 2km to the finish. All seemed quiet as clearly the boys spent a few minutes reflecting on their massive achievement, the ups the downs, the fun and the laughter…what a week.

The last 500 meters, the guys all lined up ready to take on the last corner. They rounded the bend and saw 200 meters in the distance the entire Peaky Climbers enterage again cheering, singing and hollering support.

The moment arrived, the team crossed the finish line as they started…TOGETHER.

Champagne corks popped, tears flowed hugs and kisses followed. A momentous occasion and what and incredible achievement for every single Peaky Climber.

Next week…rest, relaxation and celebration!