Today was a big day for more than just the reason we were climbing Mount Ventoux 3 times. It was Simon and Nicky Haly’s 25th wedding anniversary and today was one hell of a day to celebrate.

Looking at the photos from their wedding day, it was clear to see that Duran Duran and Culture Club impacted the attire and hair styles at the wedding 🙂

The team swiftly eat breakfast and busily prepared the kit, bikes and their food for the day. Today, a 7.30am start was essential as it was to be the most demanding ever for all of the Peaky Climbers.

Jack and Peter, our superb guides for the week, handed the CINGLES cards to each of the PEAKY team, who then collectively headed off into the town of Bedouin to each get them stamped as proof they started this immense days challenge.

Once all stamps were completed it was then off, back up past the hotel, and onwards up the first climb of the day. The route from Bedouin is the classic way up the mountain and the toughest of the 3 routes with demanding gradients of up to 13% and averaging 7.5% for the entire 21.5km climb.

Some say Mont Ventoux is the hardest of all the mythical Tour de France climbs and rightly so. The mountain achieved worldwide notoriety when it claimed the life of the great English cyclist Tom Simpson, who died here on July 13th 1967, 50 years ago this year. 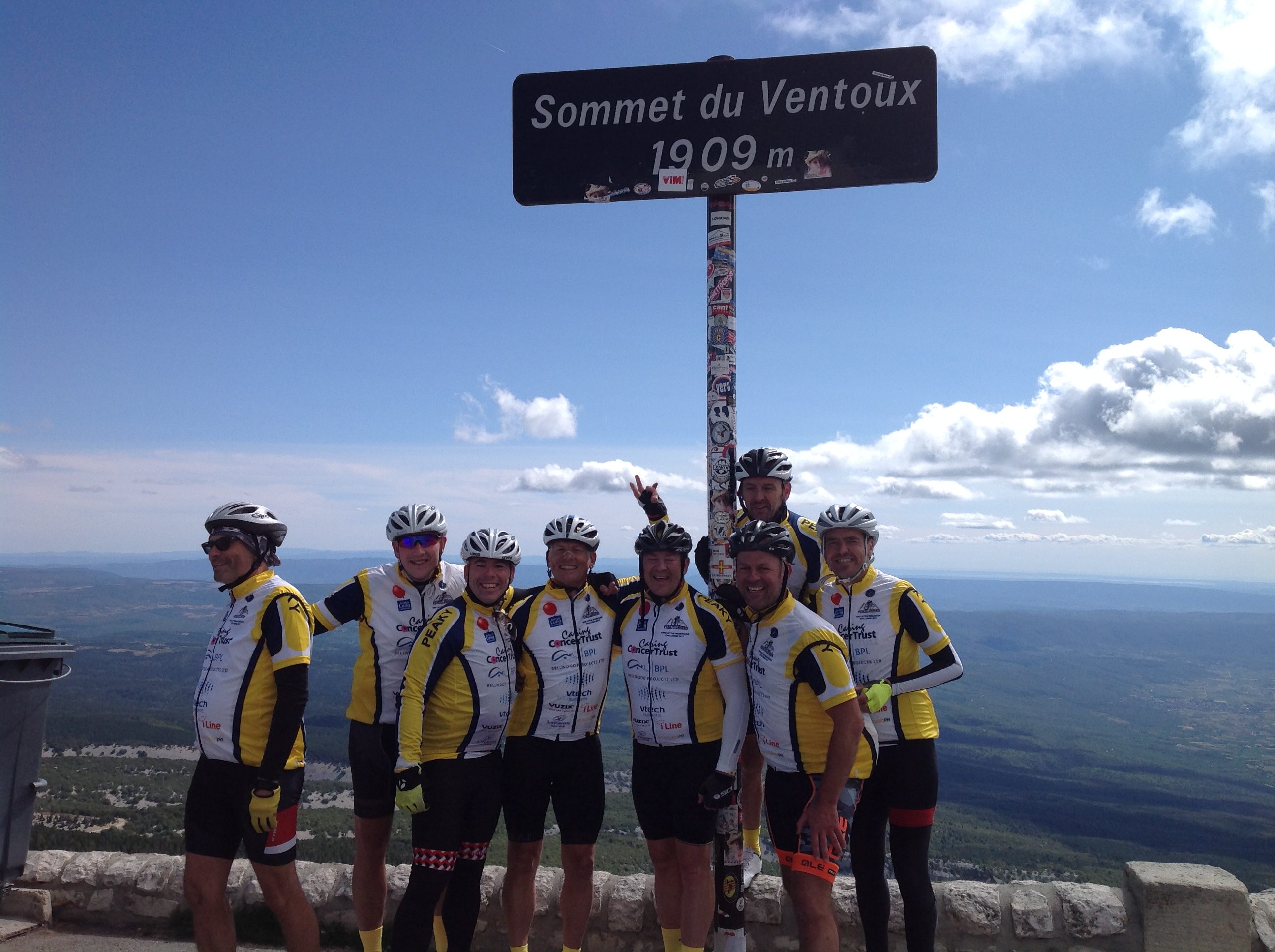 Once again the team paired up and took great pride in cycling through the first part of the climb through the infamous beautiful pine forests. This section averaged 9% for over 10km, which was incredibly demanding. The support team kept an eye on each rider, regular checks for drinks, food and pitstops…superb.
Soon enough the guys cleared the beauty of the forest and kept on rising and rising above the trees. The last 3km of this world famous mountain is more of a moonscape, with it’s exposed rocks faces and white stones which is unlike anything any of the guys had experienced previously.

The wind now started to whip up viciously. Every right turn sent them smack into a headwind that was easily 50mph plus. This combined with the savage 11% gradient meant it was the severest of tests, which needed to be beaten three times today. Soon the entire team had passed the Tom Simpson memorial, with pictures taken, it was time to push on.

This was a real test of teamwork. Everyone supported each other, taking it in turns on the front to pull each other closer to the days objectives. Nobby and Cricky reached the summit first, followed by JB and Macca. The blistering teamwork between Allen, Graham, Ben and Simon meant they soon completed the team collective at the summit.

With CINGLES books stamped, it was now time to descend. This was easier said than done as on at least 4 occasions the wind whipped itself around the Peaky Climbers seemingly trying to blow them off the mountain. After the initial careful 500m, it was time to come off the breaks and speed down ready to go again, up ascent no.2. 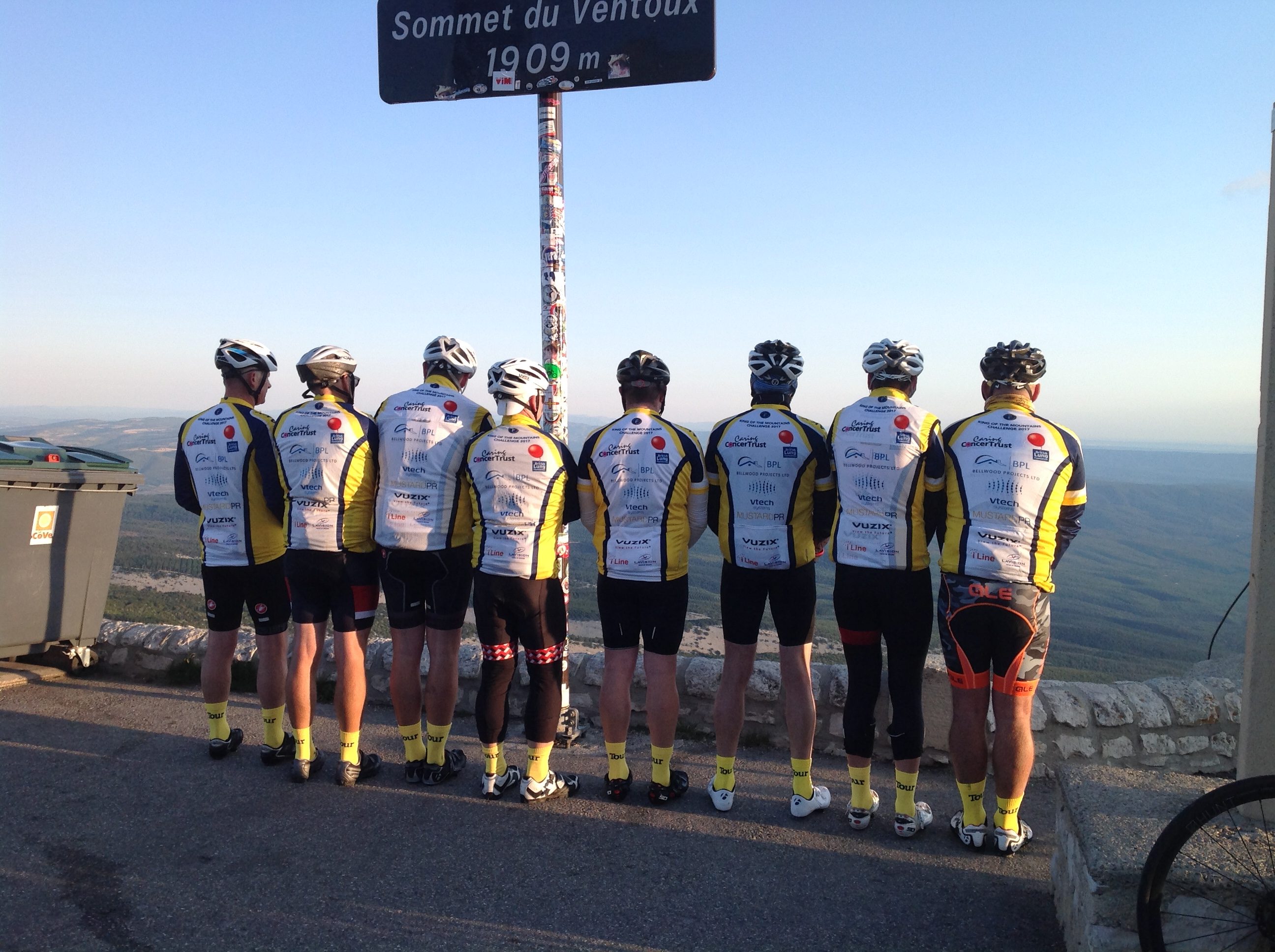 Coffee and baguettes were consumed as quickly as possible before the team gathered up and headed up ascent No.2 from Malaucene.

At this point there was no debate re which was or would be harder – today, all were uber tough!

The first 2km is tough at over 10%, which then settles to 6% unitil the 9km mark. Then it spikes and rises to 12% and settles to 9% virtually for the remainder of the climb.

It was absolutely relentless climbing. As we left the trees we were greeted with fantastic views of the tower still over 250m above your head. The last two hairpins steepen again and with the team fighting hard against the ever strengthening gails it was sapping much needed energy.

The tower drew ever closer, legs now heavy it was a solid push to the end of the second climb. The debate now was who would descend and take the risks in the gails – most did…nervously…but before you knew it the whole team was down in Sault ready for the huge 3rd climb.

The climb from Sault is a massive 26km. Fortunately the gradient is not quite as severe as the previous two climbs, but with those already in the legs…this felt challenging.

The boys started well, the sun was shining and it was fairly warm this far down as the guys cycled past the beautiful smelling lavender fields. This definately brought out Simon’s green fingered side!

The last 6km from Chalet Reynard are exactly the same as the Bedoin route. It is a section that is very exposed and has the reputation of being very windy and today did NOT disappoint…it was blowing an absolute gail!

Nobbya nd Cricky rode well, followed by JB, Allen, Simon and Macca who rode up together followed by Graham and Ben.

It was incredible to reach the summit three times in one day. For 8 novice riders to achieve this is superb, but to do so as part of a 7 day King of the Mountains Challenge is absolutely EPIC.

A day, none of the Peaky Climbers would ever forget…we are now officially CINGLES!

Tomorrow…110 miles and no rest!